Shirt orders are in for our fall tour with Moonspell and Swallow The Sun! This will be our first tour in North America! Pre-0rder your shirts here https://linktr.ee/Witherfall 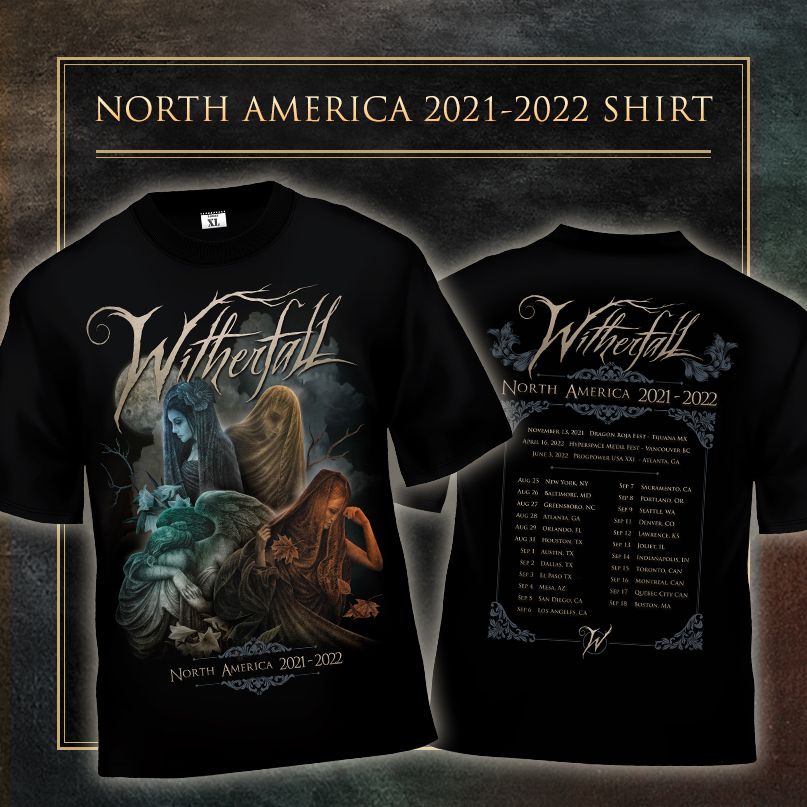 Click the image below and get your tickets for the shows! 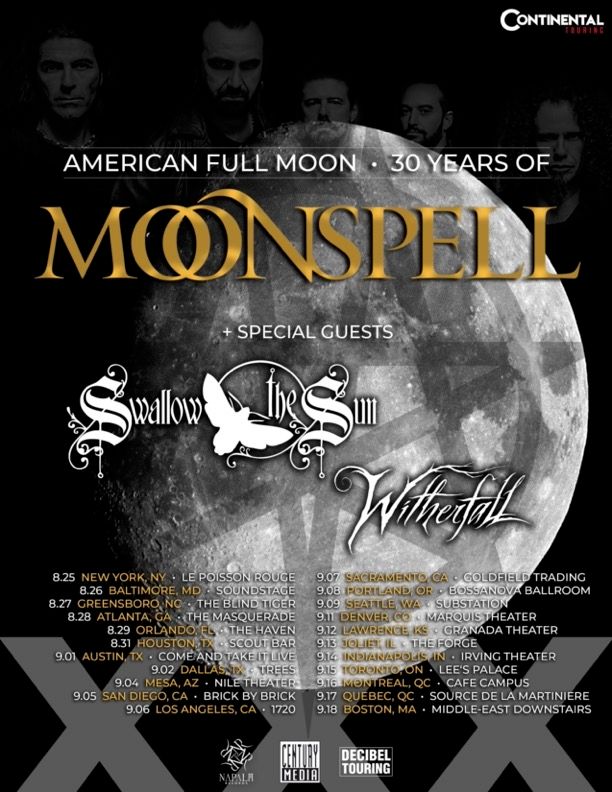 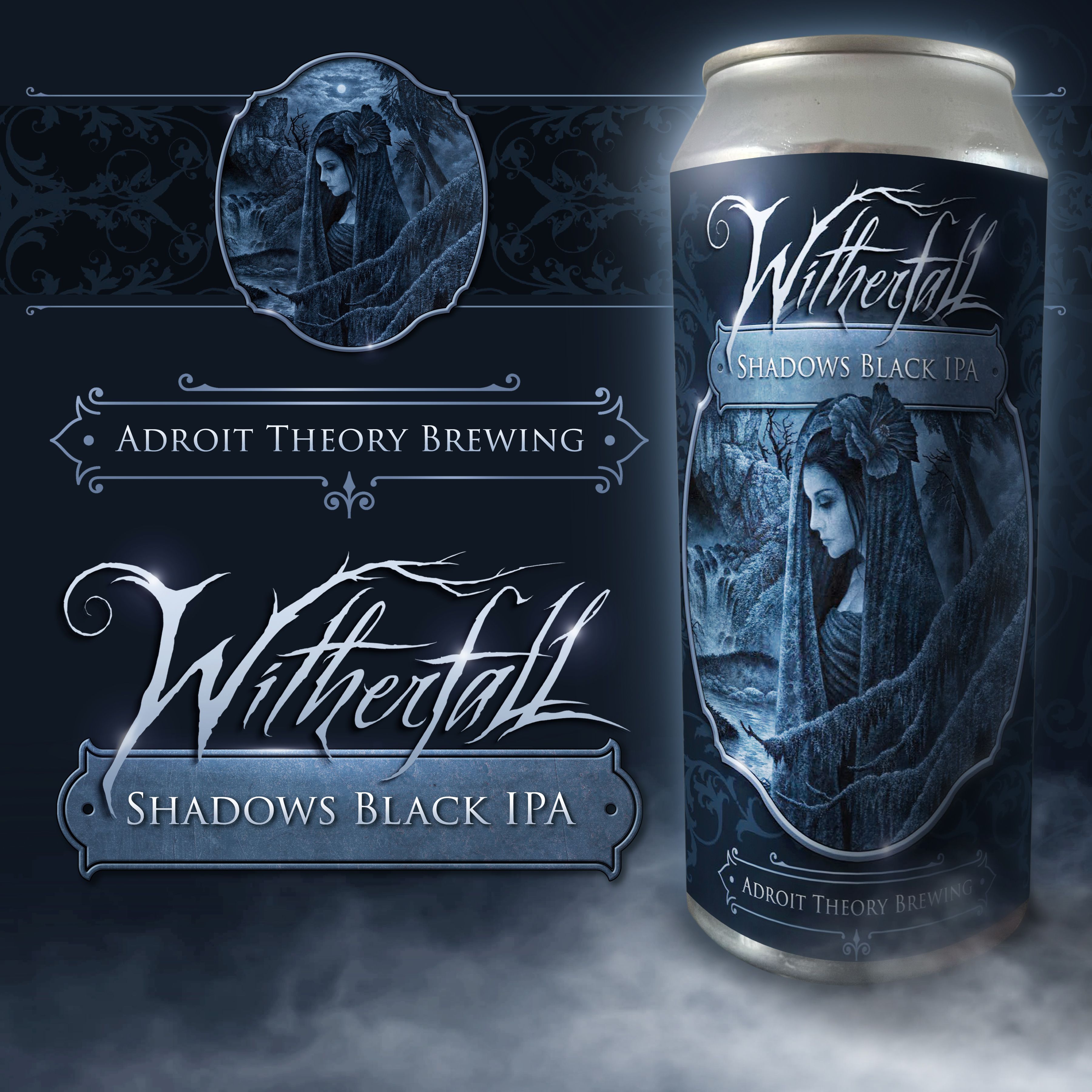 The Shadows Black IPA is hop-forward with a roasty finish. There’s a hint of umami on the mid-palette, smooth and somewhat heavy-bodied. It’s almost stout-like and pairs well with Korean bibimbap, grilled rushan (or mozzarella) cheese, a Punch Fu Manchu cigar, and your favorite WITHERFALL song.

Notes the band’s Joseph Michael: “Anyone who even casually follows WITHERFALL knows that we love wine. In 2019, we partnered with Charlie & Echo to produce our Tempest Red Blend, and it has been a great success. However, we also love beer, especially craft ales. Beer is the go-to drink in my pre-show ritual. Wine and spirits have a much lower water-to-alcohol ratio and are not good for the type of gymnastic/schizophrenic vocal delivery that I utilize. I always drink one high-quality beer, starting exactly one hour before we hit the stage. Now, I’m proud to say we have partnered with ADROIT THEORY to bring you this awesome brew, the Shadows Black IPA! We also will have limited edition shirts that commemorate ADROIT THEORY Head Brewer Bryan Younger, who recently passed away. We will be drinking a ton of this beer on the road this fall with Moonspell and Swallow The Sun. Get yourself a case and join us.”

Adds WITHERFALL’s Jake Dreyer, “Although, I only overly indulge in wine, we were getting tons of requests from fans that only drink beer. Ask and you shall receive. I have no palate for beer, but I have been told the Shadows Black IPA is very good by trusted associates. We are currently working on our fourth full-length record and are preparing to embark on our first North American tour, so we definitely can use more inebriants to fuel our creative libidos. Cheers.”

Says ADROIT THEORY’s Jon Baker: “ADROIT THEORY is thrilled to announce our collaboration with the mighty WITHERFALL! We were fortunate enough to meet their singer, Joseph Michael, at Decibel Fest last year, and asked him to come try our beer. We had an absolute blast tasting a variety of beers, discussing music, and enjoying the incredible talent at the event. We proposed a collaboration, after some time, we nailed down the idea of making a Black IPA—one of our favorite styles! We aimed to create a beer that was as unique and original as WITHERFALL’s music, and we believe we have done just that. This esoteric take on the Black IPA, along with the special artwork for the label, is sure to please metalheads and craft beer fanatics alike! We encourage everyone to stop by our booth at Decibel Magazine Metal & Beer Fest in Philadelphia this June to be among the first to try the beer! We would also like to thank Joseph and the rest of WITHERFALL for their time and dedication to making this amazing collaboration happen, and look forward to hopefully working with them again in the future!” 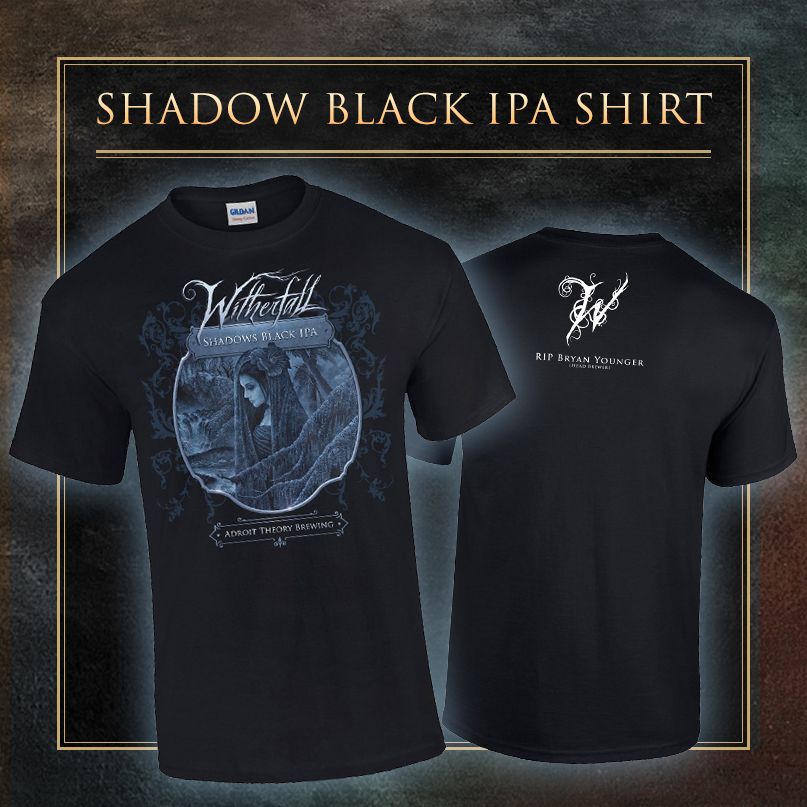 WITHERFALL is a dark melodic metal act based out of Los Angeles, California. The group — featuring singer Joseph Michael, guitarist Jake Dreyer, bassist Anthony Crawford, drummer Chris Tsaganeas, and keyboardist Alex Nasla — has released two EPs and three full-length albums, the latest of which is the critically lauded Curse Of Autumn. Germany’s Rock Hard awarded Curse Of Autumn a 9/10 rating, calling it the “highlight of the year” in 2021. WITHERFALL is currently recording their fourth full-length album and will hit the road this Fall with Moonspell and Swallow The Sun.

WITHERFALL and ADROIT THEORY would like to dedicate the Shadows Black IPA to head brewer Bryan Younger. Rest in Power, Bryan.

Today we celebrate Record Store Day as a reminder of what actually supports the great music you consume to enrich your lives and stimulate your imagination. (Hopefully along with a good bottle of some intoxicating substance and attractive company)  We are currently at work on our 4th full length album! Details are coming soon...

Thank you so much for supporting Witherfall... New Music is in the works. Please click this link and support us through the various platforms!  https://linktr.ee/Witherfall

If you are in these locations please help out the scene by purchasing "Nocturnes and Requiems" in shop and  If not we are doing a special promotion; until Tuesday enter code RECORDSTOREDAY20 and take 20% off your entire order. Just visit our Store here: https://linktr.ee/Witherfall 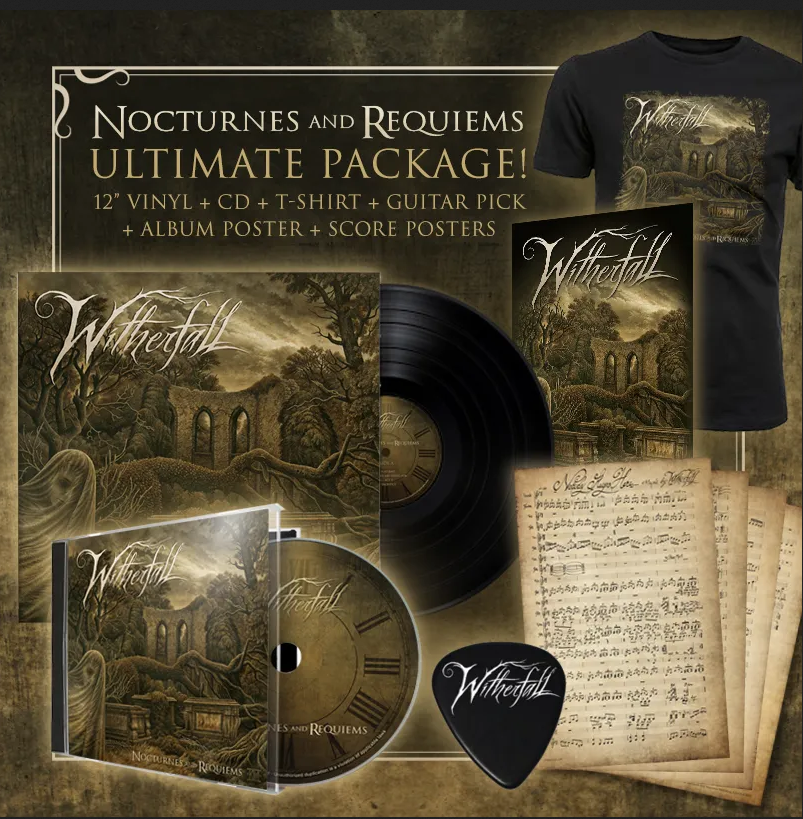 Witherfall Release music Video for "We Are Nothing"

Check out the latest Video from Witherfall! "We Are Nothing" is a 12 plus minute epic journey through multiple genres.

Witherfall are hitting the road this summer/fall! Catch Witherfall at Hyperspace fest, PPUSA and with Moonspell & Swallow the Sun! 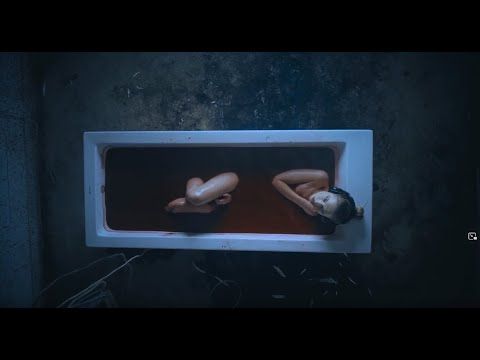 WItherfall to tour as Support for Moonspell and Swallow The Sun!

WItherfall will be hitting the road this fall with fellow Dark Melodic Metal legends Moonspell and Swallow the Sun! Due to the pandemic and other related issues this will be the first Witherfall tour around last years highly acclaimed "Curse Of Autumn"

Tickets can be found here: https://witherfall.com/tours-and-events